Printed in the Guardian

One of the most controversial and understudied aspects of Winston Churchill’s life – his involvement in the Middle East – is to be the focus of a major new permanent exhibition staged by the Imperial War Museum in London.

The exhibition blends “immersive” digital technology with historical artifacts – including a 1944 letter of condolence written by him after Jewish opponents of British policy in Palestine assassinated his friend Walter Guinness, Lord Moyne. The creators of the exhibition will have to tread carefully when it comes to sensitivities such as the debate about whether Churchill was antisemitic, and his complex views on Islam.

Churchill’s involvement in the Middle East, starting when he became secretary of state for the colonies in 1921, has been “wildly misunderstood” compared with his time as prime minister but is now more important than ever, said Warren Dockter, a Churchill scholar and author of Churchill and the Islamic World. 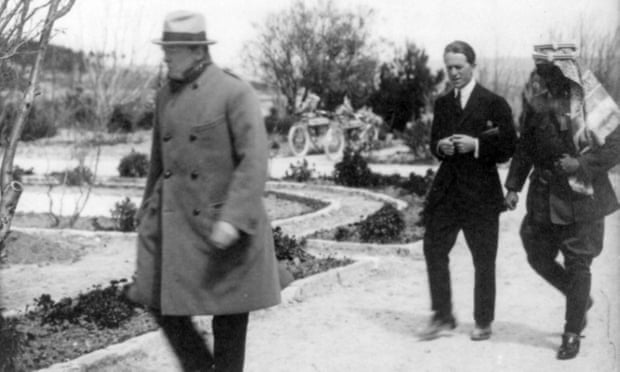 Winston Churchill, TE Lawrence and Emir Abdullah of Jordan in the gardens of the Government House, Jerusalem, at a secret conference in 1921 Photograph: Universal History Archive/UIG via Getty Images

While the Middle East is fraught with sensitivities, Dockter said that an understanding of it is crucial at a time when Islamic State is making a point of referencing the Sykes-Picot agreement – the 1916 plan in which Britain and France divided the region into spheres of influence for themselves and tsarist Russia – while neoconservatives in the west have sought to politicise Churchill’s writings.

“Churchill literally created the kingdom of Jordan, for example, and the original Palestinian mandate. He is largely responsible for how Jordan and Iraq were divided up,” Dockter said.

Opening later this year at the Churchill War Rooms in Westminster, key objects in the exhibition will include a map of the Arabian peninsula showing areas of influence of Arab chiefs. It was drawn up at the request of Churchill when he was responsible for settling questions relating to Britain’s future rule in former Ottoman empire territory.

As colonial secretary, Churchill appointed TE Lawrence as a special adviser on Arab affairs, and a personally inscribed copy of Lawrence’s Seven Pillars of Wisdom will be on show at the exhibition, as well as a flag flown by the last British high commissioner in Palestine in 1948.

Other objects include a photo album of a family holiday taken to the Middle East in 1934 by Churchill, his wife Clementine and their friends, Lord Moyne and Lady Moyne, who compiled it. Visitors will read the letter of condolence penned by Churchill to Moyne’s son and one written by a US intelligence officer reporting to Washington on the shocked prime minister’s renewed efforts to court the king of Saudi Arabia following the assassination.

Plans for the exhibition include a “jewel-like room full of objects, movement and colour, evocative of the Middle East” with a giant folio containing documents and historical items.

“We want the visitor to feel as if they have stumbled upon this rather extraordinary, if forgotten room, where a lifetime of objects, papers, old maps, photos, souvenirs and keepsakes have been stored,” the plans state.

An “immersive experience” will include an easel – Churchill was a keen artist – which will act as a projection screen. “It is envisaged that Churchill’s thoughts, ideas and musings will be blended with the developing painting giving a personal insight to accompany the events depicted on the folio, and paint a picture of the man himself.”

The exhibition may not be without its detractors. In 2012, there was controversy over plans to site a Churchill Centre in Jerusalem, with critics citing Churchill’s “latent antisemitism”, although he was honoured in the city with a bronze bust commemorating him as a friend of the Jewish people and the Zionist cause.

In an uncomfortable parallel with recent events, other critics of Churchill have sometimes returned to his remarks as minister for war and air in 1919 that he was “strongly in favour of using poisoned gas against uncivilised tribes” when it came to suppressing rebels in what is now Iraq.

Dockter, a lecturer in international politics at the University of Aberystwyth who also wrote one of the earlier briefings for the exhibition plans, said that the gas claims were misplaced and that Churchill had been advocating the use of teargas.

As for allegations of antisemitism, he said that this was usually based on a misunderstanding of a particular article written by him in the 1920s, adding: “There are a lot of sensitivities about Churchill and Israel, for example, and you can argue that some Zionist leaders were outraged that he created a separate country for the Arabs. But he was not antisemitic in any sense of the word and usually the charges are the other way, that he was too Zionist at points.

“What I argue is that he took a pretty balanced approach, given the circumstances. It is a tremendously complex area, however. A lot of people do try to paint Churchill as Islamophobic but I genuinely think that he tried to do the best for all parties.”