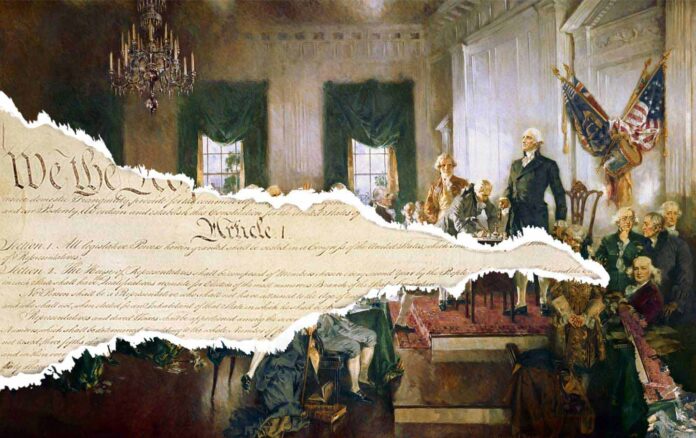 Editor’s Note: I recently ran across this article while researching the subject of nullication and state’s rights. I was impressed with author Frank Parlato’s concerns with the current state of affairs in our country. Parlato highlights the national debt of $17 Trillion (notice the article was written in 2016), our high incarceration rates (the United States incarcerates the highest amount of citizens than any other country) and our country’s growing curtailment of liberties.
Unless you’ve been living off the grid I’m sure you’re aware that our freedoms are under attack.
Ben Franklin once stated, “They who can give up essential liberty to obtain a little temporary safety deserve neither liberty nor safety.”

Benjamin Franklin said that jury nullification is “better than law, it ought to be law, and will always be law wherever justice prevails.”

As everyone knows, there is often a difference between “the law” and justice.

After all laws are made by elected officials under the influence of lobbyists and their desire to enrich themselves, and get reelected.

Anyone who thinks the typical congressman, senator, assemblyman or even local councilman is a beacon of wisdom and justice and cares first and foremost about the future of the nation is just a darn fool.

The proof is the sad shape of the state of this country with its financial recklessness, its $17 trillion debt, it’s massive incarceration rates, it’s growing curtailment of liberties. The government’s self-righteous and petty bossism over the people. The inversion from government fearing the people to the people fearing the government.

The framers of the Constitution knew that any government left on its own – i.e given too much power – will expand and serve itself (and those who work within it) over the interest of the people.

So they imposed upon government the rule that no citizen could lose his liberty without the unanimous permission of 12 people, through a trial by jury.

The jury was meant to offset the results of politicians making laws and enforcing them.  Because of the jury, politicians make the laws, but the people, through a jury, enforce them.

The founders devised it this way so it would forever be the people’s responsibility (not the government) to deliver justice.

This is evident in the writings of the founders of this nation.

John Jay, the first chief justice of the Supreme Court, said “The jury has the right to judge both the law as well as the fact in controversy.”

“I consider trial by jury as the only anchor ever yet imagined by man, by which a government can be held to the principles of its constitution,” Thomas Jefferson wrote in 1771.

John Adams said, “It is not only [the juror’s] right, but his duty…to find the verdict according to his own best understanding, judgment, and conscience, though in direct opposition to the direction of the court.”

Alexander Hamilton, speaking about the framers of the constitution, said, “If they agree on nothing else, (they) concur at least in the value they set upon the trial by jury; or if there is any difference between them it consists of this: the former regard it as a valuable safeguard to liberty; the latter represent it as the very palladium of free government.”

The way juries safeguard liberty is for jurors to nullify what they believe are bad laws by voting not guilty even if it hangs the jury. Each juror must vote his conscience. If he judges the law to be wrong, he should vote not guilty, for no one is guilty (or should be punished) for breaking an unjust law.

He said, “Were I called upon to decide whether the people had best be omitted in the Legislative or Judiciary department, I would say it is better to leave them out of the Legislative. The execution of the laws is more important than the making [of] them.”

The 19th Century American political philosopher Lysander Spooner understood the power of juries, down to the one lone juror of conscience who might hang the jury to protect the minority against the tyranny of the majority.

“For more than six hundred years — that is, since Magna Carta, in 1215 — there has been no clearer principle of English or American constitutional law, than that, in criminal cases, it is not only the right and duty of juries to judge what are the facts, what is the law, and what was the moral intent of the accused,” Spooner wrote. “(B)ut that it is also their right, and their primary and paramount duty, to judge of the justice of the law, and to hold all laws invalid, that are, in their opinion, unjust or oppressive, and all persons guiltless in violating, or resisting the execution of, such laws.”

The trial by jury was anciently called trial per pais or trial by the country, as opposed to a trial by government.

However, if you’re called to jury duty, in these perilous and unconstitutional times, you may have to hide the fact that you know your right as a juror, for some government judges, with little respect for the founding fathers, will dismiss a juror who knows his right to judge the law and the facts.

After quoting the founding fathers, it might add a dose of practicality to quote comedian Doug Stanhope. He says it colloquially but makes the point:

“Take Jury Duty. Everyone tries to get out of jury duty like it’s a big pain in the ass, but it’s honestly the easiest way you can make a difference as a single human being. If you take jury duty and it’s any kind of bullshit crime, any kinda drug possession, any prostitution, any victimless crime, anything that’s none of your goddamn business… you just say ‘not guilty’. If it’s any kind of IRS bullshit, any point-0-9 DUI, c’mon, you say ‘not guilty’.”

It might be added that a juror cannot be punished, even if one single juror hangs the jury. Even if it is a vote for not guilty because the law is bad regardless if the defendant broke the law or not.

The government cannot punish a juror for voting his conscience. This is a right an earlier jury gave us and in the future when we judge the law and the facts as jurors we do more than determine innocence or guilt, we preserve freedom in America against the growing authoritarian powers of the state.