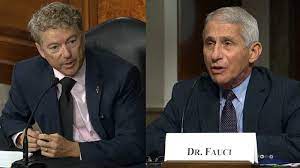 Despite repeated denials by NIAID Director Anthony Fauci that his agency used American taxpayer money to fund Chinese gain-of-function research on bats infected with coronaviruses, the National Institutes of Health – which oversees NIAID – admitted in a letter to House Oversight Committee ranking member James Comer, R-Ky., that a “limited experiment” was indeed conducted.

Comer’s fellow Kentuckian, Sen. Rand Paul, joined “Fox News Primetime” to react to the bombshell, as well as further reflect on his often-viral sparring with Fauci during Senate hearings on the matter.

Earlier this year, Paul accused Fauci of “obfuscating the truth” and at one point asked if he wished to rescind prior remarks given that it is a felony to lie to Congress.

The Brooklyn-born doctor responded that “if anyone is lying, it is you.”

Johnson & Johnson Begins Final Stage of Testing for Its Single-Dose...