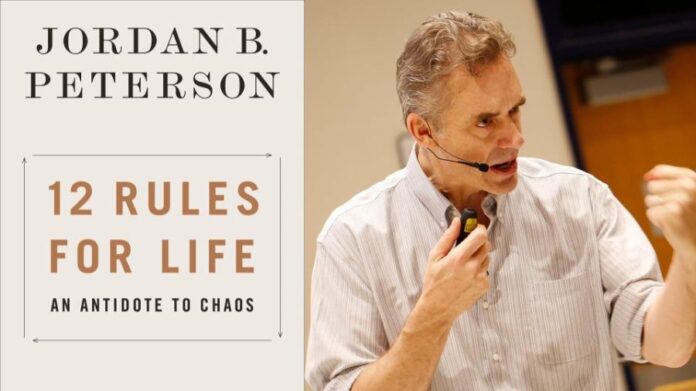 12 Rules for Life: An Antidote to Chaos
by Jordan B Peterson
By Dorothy Cummings McClean

Self-help books are usually easy reads, comprising insightful nuggets of wisdom followed by much repetition, filler and fluff. If you’ve read He’s Just Not That Into You (about why he never called again) or Fluent Forever (about learning languages), you’ll know exactly what I mean. These are books that would have made excellent magazine articles, and whose riches can be gleaned simply by reading the chapter titles. 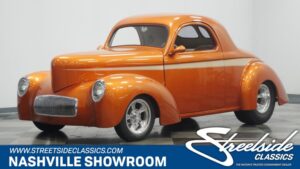 Which brings me to the best-selling 12 Rules for Life: An Antidote to Chaos, by clinical psychologist and University of Toronto professor Dr. Jordan B. Peterson. In contrast to most self-help books, it is bursting with ideas that develop his almost tongue-in-cheek list of rules into a cohesive philosophy for living heroically in a time of moral chaos. The attention of many reviewers has been caught by the description of crustacean social dynamics that illustrates Peterson’s advice to “Stand up straight with your shoulders back” (Rule 1). I’m more interested in Peterson’s interdiction against bothering children when they are skateboarding (Rule 11) because it evolves into an argument against the anti-human nihilism of those who believe the earth would be best served by the extinction of the human race.

Related: How Jordan Peterson’s ‘Antidote to Chaos’ Saved His Own Life

The following book summary is a collection of my notes and highlights taken straight from the book. Most of them are direct quotes. Some are paraphrases. Very few are my own words.

These notes are informal. I try to organize them by chapter. But I pick and choose ideas to include at my discretion. 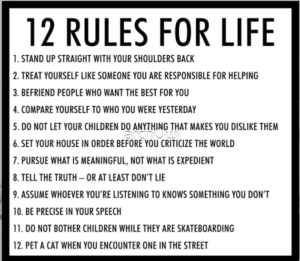 1 Stand up straight with your shoulders back
This rule is not just about posture. It is about confidence. The world has winners and losers and the winners have good posture because they have self-confidence and that self-confidence, in turn, leads to more wins. The losers have a defeatist posture and body language and this, in turn, leads to more losses. So stand up straight, believe you can, and know if you are one of the winners or the losers.

2 Treat yourself like someone you are responsible for helping
Let’s be honest, most of us feed our kids vegetables and then bing on junk ourselves. Treat yourself with the same kindness and responsibility as you would your children. Studies show people are more likely to administer medicine on time for their dogs than for themselves. This attitude needs to be corrected. You are the most important person you need to take care of. Stop waiting for others to take care of you. If you can get up on time to take the dog out, get up on time for yourself too. Our lives are all intertwined, so, your mistreatment of yourself can have catastrophic consequences for others. Strengthen the individual, start with yourself.

3 Make friends with people who want the best for you
There is a lot of negativity in the world. Some are obvious and some are not. Learn the difference and recognize character when you see it. Embody thatpositive character. Have the courage to stand by the good people and protect yourself from the negative people. Be mindful of those that will pull you down or those using you. Make friends with those who really do have enough character to want the best for you.

4 Compare yourself to who you were yesterday, not to who someone else is today
Pay attention, focus on your surroundings. Find something that bothers you, something as small as a stack of papers, and fix it. Keep going. This way you will be less concerned with the actions of others because you are focused on yourself and making yourself better.

5 Do not let your children do anything that makes you dislike them
Don’t make excuses for your children’s bad behavior. Correct it. Remember that parents are proxies for the real world. It is the parent’s responsibility to teach children how to function in society. If you find a certain behavior difficult, just think about how the world will react to it. A well-adjusted child grows up to be a likable adult that can positively contribute to society.

6 Set your house in perfect order before you criticize the world
People get caught up in how awful the world is, blame capitalism and the broken system. Before you go about blaming something else, ask yourself if you truly have your own life in order. Start small — are you indulging in any self-deprecating habits, fix that. Are your relationships in order? Stop making your life unnecessarily difficult. Take a good look at your own life, improve it and your outlook towards everything else will improve.

7 Pursue what is meaningful, not what is expedient
Expedience is following blind impulses, short-term gain, lying to get your way, thinking that is narrow and selfish. It is immature, irresponsible, cowardly, and shallow.

Meaning emerges when impulses are regulated. When you act in a way to benefit yourself, your family, and the world around you. Meaning gratifies all impulses, now and forever. Expedience only satisfies the self and now. Pursuing meaning is when making the world better, is at the top of your value hierarchy, not the self.

It is better to have meaning in your life than to have what you want. Because, really, do you know what you want?

9 Assume the person you are listening to knows something you don’t
So many of us really don’t listen to understand. We listen to respond. Because at some level, perhaps we feel we might know something the other person doesn’t. Socrates was known as the wisest living man because he knew, what he knew, was nothing. Find that humility in yourself and listen — to everyone — to learn.

11 Do not bother children while they are skateboarding
The complex psyche of human beings — when things are too safe, we try to test the limits and make things dangerous. So many mothers try to make their boys ‘soft’ and shield them from danger and harshness. This results in ‘weak’ men. “Men have to toughen up, men demand it and women want it.” If you think tough men are dangerous, wait till you see what weak men are capable of.

12 Pet a cat when you encounter one in the street
With all the sorrow and anxiety in the world, don’t forget to stop and enjoy the small blessings and truly enjoy the silly little things that make you smile.

Peterson is a man who truly loves humanity, not just as a grand concept, but as individual members of a race of beings, none of whom ought to be sacrificed to save the whales or usher in the latest Five Year Plan. Love for the individual human being fuels Peterson’s rejection of Soviet-style totalitarianism no less than it condemns the anti-humanism of Columbine killer Dylan Klebold.

In fact, the “Stand up straight with your shoulders back”/lobster fight chapter strikes me as a “hook” that gets post-Christian readers interested enough to engage with Peterson’s more obviously Christian ideas. Although some readers may be somewhat mystified as to what kind of Christian Peterson might be—his lobster-based arguments for both human hierarchy and sexual difference reveal an unabashed embrace of evolutionary theory—he bluntly states that the central figure of Western Civilisation is Jesus Christ.

Christ appears only on page 42, but he dominates the book in an unusual way, not only because Peterson begins his book with a nightmare of himself at the centre of a cruciform cathedral, but because Peterson indicates the Cross throughout his work. For example, Peterson identifies suffering as an unarguable constant of human life. (As the father of a child with juvenile rheumatoid arthritis, he has grappled in a very personal way with the suffering of the innocent.) For another, he is fascinated with the Bible, not in a strictly theological sense, but as a source of psychological truths, or as truths about human psychology. This, too, makes Peterson’s thought attractive and instructive to listeners who have hitherto rejected the Scriptures as irrelevant to modern life.

Alongside love of humanity, horror at totalitarianism, recognition of Christ at the centre of Western Civilization, and acceptance that suffering is inevitable, Peterson reveals a fascination with truth-telling. In his famous interview with Britain’s Cathy Newman, Peterson stated that he is very careful with his words; having read his book, I realize how very true this is. Under “Rule 8: Don’t Lie”, Peterson describes his quest to always tell and act the truth, an endeavor which is much harder than it sounds, involving strict self-policing. While reading Peterson on the importance of telling the truth (“or, at least, don’t lie”), I was reminded of Saint Augustine of Hippo, who thought any lie was an abuse of God’s merciful postlapsarian gift of language. Peterson thinks hiding from the truth, or lying, is deeply damaging to the character, leading ultimately to disappointment, failure, vengefulness, and hell.

To read…the ‘Rest of the Story’ visit Catholic World Report Lucky strike: US man wins $2 million from a lottery ticket—for...