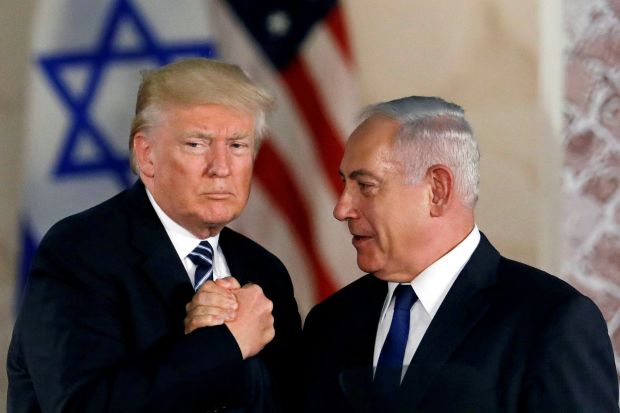 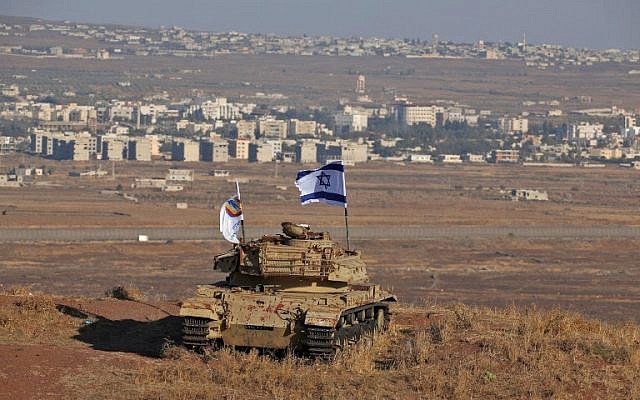 Photo taken on October 18, 2017 shows an Israeli flag fluttering above the wreckage of an Israeli tank sitting on a hill in the Golan Heights and overlooking the border with Syria. (Photo by JALAA MAREY / AFP)

Israel’s leaders on Thursday welcomed US President Donald Trump’s announcement that the time had come for the United States to “fully recognize” Israeli sovereignty over the Golan Heights, while the Palestinians warned the move would further destabilize the region and lead to bloodshed.

“After 52 years it is time for the United States to fully recognize Israel’s Sovereignty over the Golan Heights, which is of critical strategic and security importance to the State of Israel and Regional Stability!” Trump tweeted.

There was no immediate reaction from Syria, which has long vowed to recover every inch of the Golan from Israel.

In Israel the move won widespread praise, but coming just weeks before Israel’s elections, much of the reaction was framed by the campaign.

Speaking at a press conference with US Secretary of State Mike Pompeo, Netanyahu said Trump had “made history.”

“I called him. I thanked him on behalf of the people of Israel. He did it again. First, he recognized Jerusalem as Israel’s capital and moved the US embassy here. Then, he pulled out of the disastrous Iran treaty and re-imposed sanctions.

“But now he did something of equal historic importance — he recognized Israel’s sovereignty over the Golan Heights, and he did so at a time when Iran is trying to use Syria as a platform to attack and destroy Israel. And the message that President Trump has given the world is that America stands by Israel.” 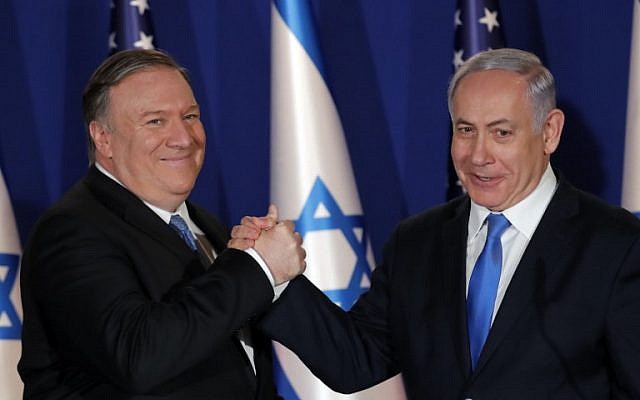 Pompeo praised Trump as well, and added: “The people of Israel should know that the battles they fought and the lives they lost on that very ground [the Golan] were important and worthy.” Israel captured the Heights from Syria in the 1967 war.

“This is the right response to Iran’s aggression from Syria and a clear message to Assad. Trump’s statement does historical justice almost 40 years after the decision of Menachem Begin on Israel’s sovereignty over the Golan. Thank you, Mr. President,” he said. 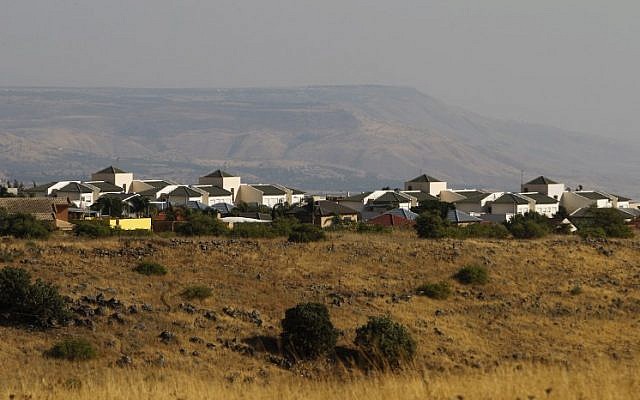 The Jewish community of Qatzrin in the Golan Heights, on June 28, 2017. (Photo by JALAA MAREY / AFP)

Members of Netanyahu’s ruling Likud party were quick to praise the prime minister for the shift in US policy.

“President’s Trump’s recognition of Israeli sovereignty on the Golan is another achievement for Netanyahu’s foreign policy,” said Deputy Foreign Minister Tzipi Hotovely. “This term will be remembered in history as one where Netanyahu changed the rules of the game and brought about maximum Israeli gains with zero concessions.”

Yair Lapid, a leader of the Blue and White party that is seen as a main challenger to Netanyahu in the upcoming elections, praised Trump, but also tried to claim credit for the initiative.

“Thank you @POTUS for your intention to recognize our sovereignty over the Golan,” he tweeted. “We started this campaign a year ago and the leadership of @BlueWhite2019 stood on the Golan Heights and called for recognition. President Trump has shown again that he’s a true friend of Israel.”

Thank you @POTUS for your intention to recognize our sovereignty over the Golan. We started this campaign a year ago and the leadership of @BlueWhite2019 stood on the Golan Heights and called for recognition. President Trump has shown again that he’s a true friend of Israel.

Meanwhile, Education Minister Naftali Bennett of the New Right party warned that Israel may be expected to make concessions with the Palestinians in exchange for the move.

“With all the joy of American recognition of the Golan Heights, it is essential to say: The ‘Golan in exchange for Hamastan’ deal is a danger to Jewish settlements and to Israel.

“We call upon Prime Minister Netanyahu to announce as early as this evening that his agreement to the establishment of Palestine in the Bar-Ilan speech is null and void,” Bennet said referring to a 2009 speech where Netanyahu laid out his acceptance of the two-state solution.

This was echoed by the far-right Union of Right-Wing Parties, which thanked Trump, but warned the Israeli public not to let the move blind them to the dangers of Trump’s expected peace plan.

Details of the plan have not yet been released, but URWP, a union of the Jewish Home, National Union and extremist Otzma Yehudit (Jewish Power), warned that it would demand Israeli concessions in the West Bank.

“Only a government with the Union of Right-Wing Parties will stand firm,” it said.

Head of the Golan Heights Regional Council Haim Rokah said it was “about time” and called on Israel to increase funding and investment for the region “and double the population.”

However, lawmakers from the mostly Arab Hadash party accused Trump of timing the announcement to try and influence the election and get Netanyahu re-elected — an assertion Pompeo denied.

“Trump is trying to save Netanyahu from his desperate situation and return him to power,” said MK Aida Touma-Sliman.

Touma-Sliman called the recognition part of “the entrenchment of Israeli and American control over the Middle East and a targeted assassination of the … opposition in the Golan by thousands of Syrian citizens, who are standing firm against all attempts at Israelization and normalization” — a reference to the Golan’s Druze population.

“Decisions on the Middle East should not be unilateral, and certainly not announced over Twitter,” he said, warning that it would further destabilize the region.

Israel captured the Golan Heights from Syria in the 1967 Six Day War and extended Israeli law to the territory in 1981, a step tantamount to annexation. But the United States and the international community have long considered it Syrian territory under Israeli occupation. The plateau lies along a strategic area on the border between Israel and Syria. 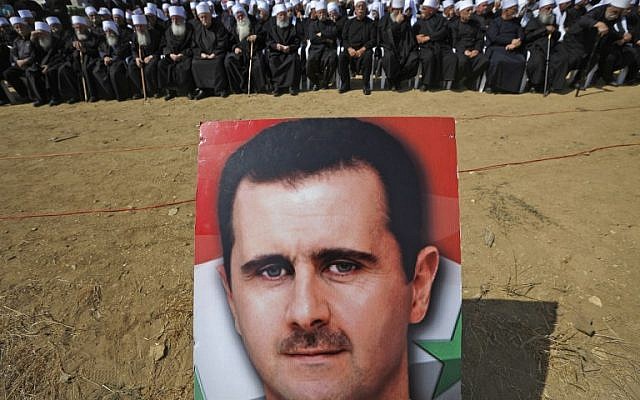 Syrian President Bashar Assad as members of the Druze community attend a rally in the Druze village of Majdal Shams in the Golan Heights commemorating the 45th anniversary of the 1973 Arab-Israeli war, on October 6, 2018. (Photo by JALAA MAREY / AFP)

A top Palestinian official warned that this was yet another move by the Trump administration to adopt Israel’s positions and warned it would lead to further instability in the region.

“Yesterday president Trump recognized Jerusalem as Israel’s capital. Today for regional stability he wants to make sure that the occupied Syrian Golan Hieghts (sic) be under Israel’s sovereignty,” tweeted Saeb Erekat, the secretary-general of the Palestine Liberation Organization’s Executive Committee.

“What shall tomorrow bring ? Certain destabilisation and bloodshed in our region,” he said.

Yesterday president Trump recognized Jerusalem as Israel’s https://t.co/A8nWFdMkyz for regional stability he wants to make sure that the occupied Syrian Golan Hieghts be under Israel’s sovereignty. What shall tomorrow bring ? Certain destabilisation and bloodshed in our region.

Tony Evans: God Is In Control