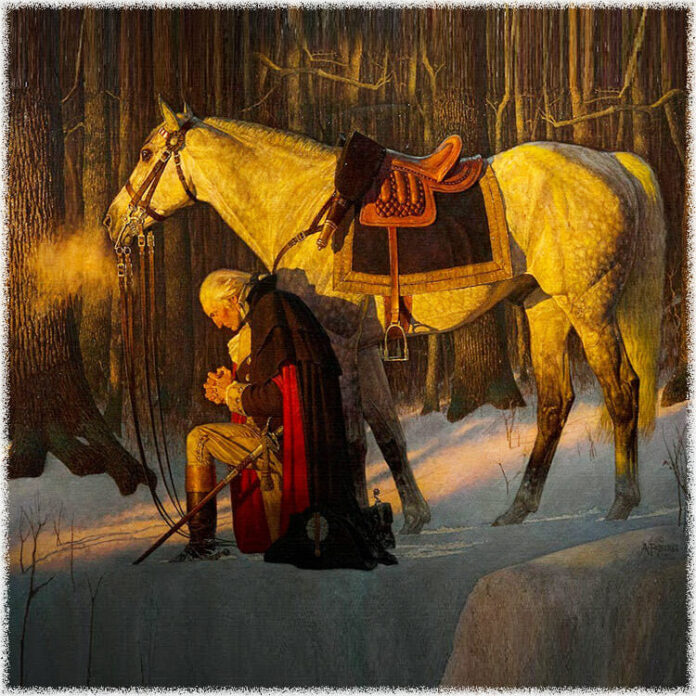 Valley Forge National Historical Park is the site of the third winter encampment of the Continental Army during the American Revolutionary War. This encampment extended from December 19, 1777 to June 19, 1778. During this period of time, an inconspicuous, yet important, event occurred that is part of the many strands that compose the Christian tapestry of America’s origin as a nation.

Contrary to contemporary claims that America’s Founding Fathers were secular in their outlook and founding of America, George Washington and the overwhelming majority of Founding Fathers were Christian in both principle and practice. Secularists and the irreligious who attempt to continue to suppress the public Christian expression and origin of America do so against the facts of history. When speaking of the lives of America’s Founding Fathers, secularists always relate minimal information convenient to their cause without allowing these small fragmented pieces to be properly placed within the context of the entire picture. The fact is that a careful study of the lives of the signers of the Declaration of Independence will demonstrate that not one of them was a Deist, as claimed by secularists. A brief study of an important moment in the life of America’s Founding Father—George Washington—will demonstrate what is generally true concerning the overwhelming majority of the rest of the Founding Fathers.

Since many of those who died in the American Revolution were clerical or lay leaders of America’s churches, a spiritual vacuum ensued in the young nation following the War of Independence. So great was this spiritual void that many thought America would not survive long, but those most deeply concerned resolved to lay a foundation for future generations of Christian leaders. Their solution, in part, was to train the youth of America to follow the principles of Christ by gathering them into schools where those Christian principles and their application to life could be taught. Their efforts began with the formation of Sunday schools in Philadelphia, Pennsylvania and developed into the formation of the American Sunday-School Union in 1824.

Some of the most distinguished leaders of early America were among the leaders of the American Sunday-School Union: signer of the Declaration of Independence and Surgeon General of the American Continental Army, Dr. Benjamin Rush; Congressional chaplain, Rev. Dr. William White; long-time vice president, Pennsylvania Governor John Pollock who, as director of the United States Mint in Philadelphia, first inscribe our currency with “In God We Trust”; Supreme Court Justice, Bushrod Washington, nephew of George Washington; Supreme Court Chief Justice, John Marshall; author of our national anthem, Francis Scott Key; American statesman, Daniel Webster; and later, D. L. Moody, the well-known evangelist; John Adams, relative of both early American presidents and organizer of more than 320 Sunday schools; Laura Ingalls Wilder, author of the Little House on the Prairie novel series; and others concerned about Christianizing the youth of America.

To ensure that Sunday-School Union schools had what was needed to educate youth, small libraries were encouraged by Union leaders. In some communities, these small libraries were the largest literary repositories in the area. The American Sunday-School Union printed books for their scholars, and among the first to be printed was a biography of George Washington, written by Anna C. Reed (please see below). In it, the personal, moral, and spiritual life of the Father of America were related to young readers, challenging them follow in the footsteps of this great American.

Anna Reed relates one of the most vivid stories of General Washington’s spiritual life that occurred when the General and his troops were in winter quarters in Valley Forge, not far from Philadelphia. Various artists have attempted to capture this scene with their brushes. After describing in some detail the hardships under which the American troops lived at Valley Forge, Reed proceeded to relate the following anecdote of General Washington’s prayer life. She begins with a quote from a letter the General was writing to Patrick Henry concerning the hardships of the soldiers. General Washington was surprised that the soldiers did not lament the conditions at Valley Forge:

In describing their condition in the hut-camp, he said [in his letter to Patrick Henry, then governor of Virginia], “For some days there has been little less than a famine in the camp; but, naked and starving as they are, I cannot enough admire the incomparable Þdelity of the soldiers, that they have not before this time been excited to a general mutiny or dispersion.”

The inhabitants of the surrounding country, knowing this sad state of the army, were very uneasy; one of them left his home, one day, and as he was passing thoughtfully the edge of a wood near the hut-camp, he heard low sounds of a voice. He stopped to listen, and looking between the trunks of the large trees he saw Gen. Washington engaged in prayer He passed quietly on, that he might not disturb him; and, on returning home, told this family he knew the Americans would succeed, for their leader did not trust in his own strength, but sought aid from the hearer of prayer, who promised in his word, “Call upon me in the day of trouble; I will deliver thee, and thou shalt glorify me.” A female, who lived at the Valley Forge when the army was encamped there, told a friend who visited her soon after they left it, that she had discovered that it was the habit of Washington to retire to a short distance from the camp to worship God in prayer. Many, who in “the day of prosperity” have forgotten or neglected to worship their Creator, will earnestly call upon him in ” the day of trouble,” when they feel that His power only can deliver them; but it was not thus with Washington; it was his constant custom as one of his nephews has thus related: “One morning, at daybreak, an officer came to the general’s quarters with dispatches. As such communications usually passed through my hands, I took the papers from the messenger and directed my steps towards the general’s room. Walking along the passage which led to his door, I heard a voice within. I paused, and distinctly recognized the voice of the general. Listening for a moment, when all was silent around, I found that he was earnestly engaged in prayer. I knew this to be his habit, and therefore retired, with the papers in my hand, till such time as I supposed he had finished the exercise, when I returned, knocked at his door, and was admitted.” Thus, in obedience to Him whom he called ” the Divine Author of our blessed religion,” Washington, in the retirement of his chamber, prayed to his “Father who seeth in secret,” and truly his “Father, who seeth in secret,” did ” reward him openly.”[1]

John Adams understood what many in America today adamantly seek to deny—that the principles of Christianity were responsible for the birth of America. Adams was one of the most influential Founding Fathers, providing a leading voice in the formation of the Declaration of Independence and contributing important thoughts on the nature of government with his pamphlet, “Thoughts on Government”—which was particularly influential in the formation of state constitutions. On June 28, 1813, John Adams penned a letter to his friend Thomas Jefferson. In it, Mr. Adams clearly identified the influential role that the Christian faith played in the formation of America as an independent nation:

In recent years, America’s military leaders—like much of the nation—have nearly forgotten the Christian origin of the greatest nation the world has ever known. Least committed to America’s Christian heritage have been many of the commanders of the Air Force! Intimidated by secularist, atheists, agnostics, and every form of irreligion, many of America’s military leaders have completely forgotten—if they have every known it—the example set for the military by the Father of America, George Washington. Let any military leader of America, not only study the life of Washington as an example of military leadership, but particularly study his general orders, and they will find in the very first set of his general orders a command to the men serving under him not to neglect attendance at worship—not Muslim or Buddhist—but Christian worship! There is no other receipt for a successful nation than the one given by America’s Founding Fathers—as President John Adams said, “the general principles of Christianity.” If America and her military is to be great once again, she will have to follow the example set by her Founding Fathers!

Former Army Sergeant, Principal Who Inspired Film ‘Lean on Me’ has...