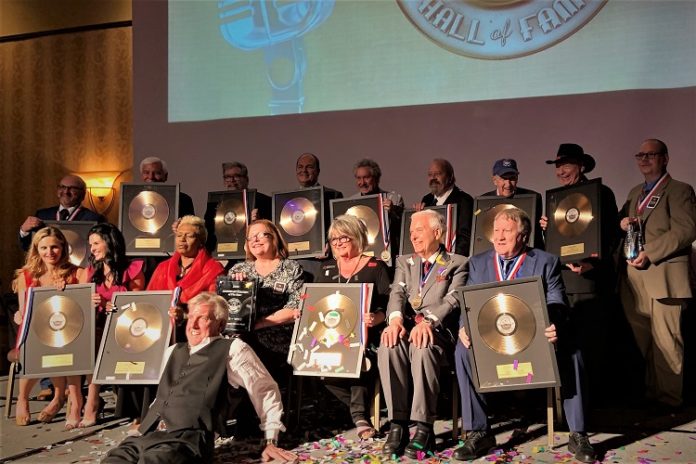 WGNS Radio, Dave Ramsey and others were honored and inducted into the Tennessee Radio Hall of Fame. WGNS Radio, Bart Walker, Scott Walker and Bryan Barrett accepted the 2019 Luther Award for Community Service from the Radio Hall of Fame at their induction ceremony at Embassy Suites Hotel in Murfreesboro. The event had a packed audience last Saturday August 3.

Bob Keisling, the play by play voice of the Tennessee Volunteers, was this year’s emcee. He introduces and welcomes Bart and Scott Walker along with Bryan Barrett to the stage:

The Luther Award honors one outstanding Tennessee radio station for its above and beyond service provided to the community it services.

Named for Chattanooga radio legend Luther Masingill, who spent more than 70 years waking up residents of Chattanooga and southeast Tennessee, the award will recognize one station that consistently provides an exceptional level of community interest, involvement and interaction throughout the year.

Luther did not simply host a morning show on legendary station WDEF, and the Luther Award does not go to a station who simply runs public service announcements or conducts a once-per-year radiothon. The winning radio station will have shown a depth of service, enabling and participating in all segments of the community.

(Editor’s Note: The staff at Tennessee Ledger congratulate all the inductees into the Tennessee Radio Hall of Fame. We were grateful to be invited. We have personally seen the great work that WGNS, their staff and Dave Ramsey has done to impact Middle Tennessee. Whether it’s WGNS’s Bart Walker hosting the Action Line, Bryan Barrett or Scott Walker hosting Rutherford Issues.

Dave Ramsey has dedicated his life to help individuals and families improve their finances by cutting their debt, living more simply and cutting up those dreaded credit cards.)

Got Buyer’s Remorse? Can I please return the car I just...