Even if some reactions to the latest ‘Twitter Files’ are overblown, that doesn’t mean there’s nothing to see here.

Over the past week, more “Twitter Files” have rolled out that show how the FBI tried to control the flow of information on the platform.

In Part 6, independent journalist Matt Taibbi described the FBI’s contact with Twitter over the past few years as “constant and pervasive,” going so far as to call Twitter a “subsidiary” of the FBI. In Part 7, The Free Press’s Michael Shellenberger provided evidence suggesting that the FBI’s and the Department of Homeland Security’s repeated warnings to Twitter about foreign election interference led the company to suppress the Hunter Biden laptop story. 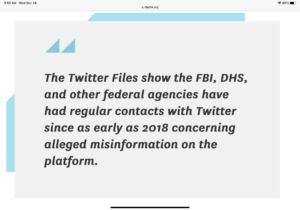 Some claim these disclosures prove Twitter was an accomplice in federal agencies’ politically motivated attempts to silence conservative voices. As Ross Barkan noted in The Nation, other outlets have ignored the Twitter Files or dismissed the revelations as unremarkable, showing nothing more than the government’s good-faith efforts to protect election integrity.

How the Biden Administration Lost Its Way (Joe Needs To Go)