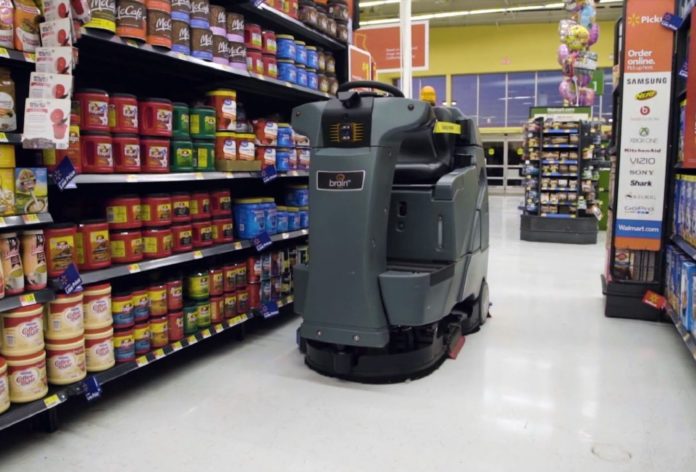 The world’s largest retailer by revenue will soon have autonomous robots scrubbing the floors of hundreds of Walmart stores across the U.S. Walmart will deploy 360 floor-scrubbing robots armed with computer vision and AI capabilities in hundreds of its stores by the end of January 2019, the company said this week in a joint press release with San Diego-based AI company Brain Corporation.

Brain Corp. makes the robot floor scrubbers, called the Auto-C, powered by the company’s BrainOS technology platform, which includes autonomous navigation that uses multiple sensors to scan the robots’ surroundings for obstacles, like people. (That means the autonomous robots could even be used when customers are in the store.)

The BrainOS-powered robots also use artificial intelligence to collect information about their environment and adapt to those surroundings.

Walmart employees will be able to map out cleaning routes for the AI-supported robot scrubbers and then send them off on unmanned cleaning missions “with the press of a single button,” the companies said in the press release.

1:15
If robots take your job, the government might have to pay you to live

The robot scrubbers will free up existing Walmart employees to have more time to perform other tasks, according to John Crecelius, Walmart’s vice president of central operations. “BrainOS is a powerful tool in helping our associates complete repetitive tasks so they can focus on other tasks within role and spend more time serving customers,” Crecelius said in a statement.

A computational neuroscientist, Izhikevich co-founded Brain Corp. in 2009 and the company has raised roughly $125 million in funding from investors who include Softbank and Qualcomm. While Walmart and Brain Corp. did not disclose any plans for additional partnerships in the future, Izhikevich did say in the press release that his company “look[s] forward to continuing to work alongside Walmart to help build intelligent, connected stores.”

Walmart has already deployed robots to take over other work usually performed by human employees, including using shelf-scanning robots in dozens of US stores to search for inventory and prices while also locating misplaced items.

Walmart is looking to rely more and more on automation in the future — an evolution that could free up current employees to perform more efficient, higher value tasks, but which some critics worry could also result in lower wages and fewer jobs at a company that is currently America’s largest private employer with over 1.5 million paid workers.