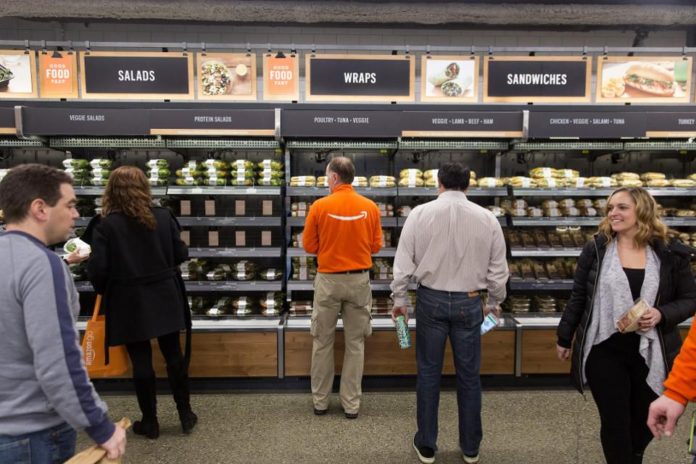 I just read that Amazon is testing cashier-less technology in larger stores after it opened its first cashier-less store, Amazon Go, in Seattle at the beginning of the year.  With minor glitches to the system in its trial phase last year, Amazon Go has gone ahead as planned and it is catching on wildly.  What’s not to like about going into a store, picking up everything you need, and leaving without having to stand in line at a checkout counter?

Well, for some of us, we actually like that human interaction at the cash register. Even now I miss one of the cashiers I would see at the Waitrose in my old London neighborhood. This one cashier and I would exchange ideas on the news of the day, we would talk about Gujarat, or just remark about how badly Brexit was going. I hate lines, but I love that human interaction involved in the market exchange. It might be the only saving grace about such exchanges, but it makes human connections possible in the context of the market space.

Here are some of the arguments on the pro “Just Walk Out” technology side that claim that this software will not only make waiting in a line a thing of the past, but it will make our lives easier in many ways we never thought about.  Some argue that many people don’t like to do the job of a checkout clerk, while others argue that in computerizing these sorts of jobs, humans are liberated from the mundane in order to focus on “fun things” like art, video games, and their hobbies. Then there is the added quality of life that we gain by not standing in checkout lines. According to a report last year, Britons spend 52 days of their lives waiting in lines. Imagine getting that time back!

On the other side of the aisle are answers to the above which are steeped in material reality. For starters, who is to say that these jobs are all that mundane or that everyone would rather be at home playing video games?  One of the pretenses with technology is that many presume that most people wouldn’t want to do certain jobs and would rather be at home watching TV. I tested this theory when making a film during the LSX protests in 2011, as most every protestor echoed similar ideas claiming that nobody wanted to work. What I found is that people generally do love working and would become bored without their jobs. As for people not wanting to do checkout as a job, there are personalities to suit all sorts of jobs. I once met a woman in Brighton who proudly told me that she was a cashier and tired of people giving her the droopy face, “I know I’m not supposed to love my job and that many view it as a job you do while in school, but I LOVE my job and I hope I can do it until I die.”  Who’s to argue with that?  But from a class analysis perspective, how will people survive is all such jobs are let out to AI in the absence of basic income? I mean it’s not like the wealthy who own the corporations which make robots, building constructions and the AI and tech used to drive this new form of commerce forward are going to feel generous and share the wealth with the millions laid of, right?

And then there is my personal argument which is basically anthropological and related to the material reality of workers’ rights. For new technology has the ability to catalyze and accelerate the changes in labor, but the social forces of ownership and dependent labor are not rewritten by these technologies. In order for professors to be outsourced to virtual lecturers—something that is being experimented with—or for cashiers to be replaced by AI, we need to have serious discussions as to what happens to the wealth accumulated by the absenting of these lives in the workforce. The potential for information technology to delegitimize wages and change the very institutions through which labor takes place, must be discussed amongst the working class. As their jobs are being outsourced to robots and AI, nobody is worried about how these workers will continue to survive. Viewed from another perspective, as Taylorism, a form of scientific management, swept the late 19th century scene of work, this theory of organizing labor became a model for capitalism the world over. Seizing control of the body, individuating movements and streamlining actions of each worker yielded great production value. However, few thought of the effects this had upon the human body and mind, until later critiques to include Charlie Chaplin’s Modern Times (1936) and Robert Blauner’s 1964 classic, Alienation and Freedom, took aim at such practices.

The 19th century design of Taylorism and the contemporary AI checkout services today have one thing in common: the lack of consideration of workers’ rights, the lack of consideration that workers are at all human.  While it might seem luxurious to take out iPhone out, check into Amazon’s “Just Walk Out” app, and then shop til we drop, we are not only walking out on the potentially long line at the exit, but we are walking out on solidarity with the hundreds of thousands of people across the country who will be left without salaries.  We are also abandoning a culture that prioritises the human over the economic. This last point might seem trivial, but we need to rethink the space of quotidian conversations that are part of work and social life. Might these be essential for our collective humanity?

I am an independent scholar, filmmaker and activist who specializes in anthropology, technology, and political philosophy. My latest book is “Earthquake in Haiti: The Pornography of Poverty and the Politics of Development” (2015) and I am a contributor to CounterPunch, Truth…

Julian Vigo is a freelance journalist and writer. Follow her on Twitter or send her an email.

How Writing Improves Thinking: a Simple Guide for Anyone and Everyone