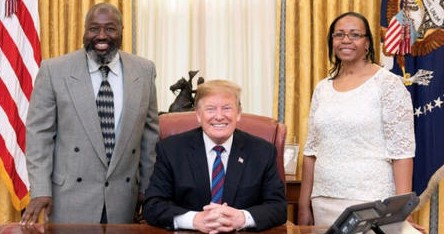 Matthew Charles, a former prisoner Trump praised at the State of the Union has a radical proposal to give inmates a 2nd chance at freedom after 15 years

Charles is from Nashville, Tennessee, he’s father, grandfather and army veteran who won early release under President Obama’s commutations for drug offenders was invited by President Donald Trump to his State of the Union Address. The White House released a statement praising Charles, who once faced a 35-year sentence. “Matthew is the very first person to be released from prison under the First Step Act,” Trump said during the SOTU.

Charles did well on the outside for two years, and then was ordered back to federal prison after a court determined he didn’t really qualify for the clemency after all. He was released again in January 2019 under a new bill.

Attorneys and supporters of Nashville native Matthew Charles agree that he’s a “shining example” of rehabilitation.

Charles received a 35 years behind bars in 1996 for selling drugs and was released after two decades when a federal judge reduced his sentence. Upon release, he obtained a job, started a relationship and set his sights on living a productive life.

In January 2019, Matthew Charles again won his freedom. Charles was released under a criminal justice reform law. “The First Step Act is the bill that actually allowed me to be released from federal prison after serving 22 years,” Charkes said after his release.

“Something needs to be done,” he told News Channel 5. “We’re giving too many long sentences for nonviolent crime and some of them have changed.”

Before he was freed again, support for the man came everywhere from the conservative Federalist site to celebrity Kim Kardashian (who recently helped convince Trump to free Alice Marie Johnson, a great-grandmother convicted of a drug conspiracy who was serving a life sentence).

According to Nashville Public Radio, “… the First Step Act, signed into law by President Trump last month, opened another avenue, in part by reducing guidelines for crack offenses and making those changes retroactive.” Prosecutors did not oppose Charles’ release.

Charles, who is 51-years-old according to court filings, served 21 out of 35 years for a crack cocaine dealing sentence before he was initially released from federal prison in 2016. Although reports say he’s done well on the outside, the government re-sentenced him to serve the rest of the term after arguing that Obama’s commutations didn’t apply to his case.

The government once had argued that Charles’ serious criminal history before the drug dealing, which included a shooting, rendered him ineligible for the sentence reduction. You can read some of the court records in the case below. However, Charles’ attorneys and supporters argued that he’s a “shining example” of rehabilitation and that society was no longer served by putting Matthew Charles back behind bars. There is a GoFundMe page to help Charles.

“Charles never had a single disciplinary write-up in over twenty years in prison,” court documents filed by Charles’ attorneys say. “Taking classes and working, he was a model inmate. On supervised release, his record is immaculate. He works full time, does volunteer work to serve the poor, and is a shining example of what a person can, despite felony convictions, make of his life.”

The White House Calls Matthew Charles a ‘Story of Redemption’ In announcing why he was chosen as a Trump guest for the SOTU, the White House wrote, “Matthew Charles’s life is a story of redemption. In 1996, he was sentenced to 35 years in prison for selling crack cocaine and other related offenses. While in prison, Matthew found God, completed more than 30 bible studies, became a law clerk, taught GED classes, and mentored fellow inmates. On January 3, 2019, Matthew was the first prisoner released as a result of the First Step Act.”

To see more on this story visit: https://heavy.com/news/2019/02/matthew-charles-sotu/

To-Go Drinks an Elixir for Public, a Lifeline for Business