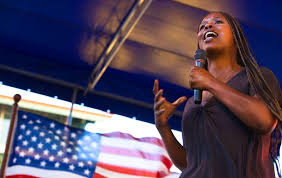 For the first time ever, I’m concerned about my freedom to do my work to run a policy institute addressing issues of culture, race and poverty from a conservative perspective.

In an interview with Breitbart News this week, I said that Martin Luther King would be canceled today. King, a pastor, reminded Americans to judge a man based on his character. This basic truth of Christianity inspired Americans to live their faith. But it would be no surprise that liberals today would remove his speeches from the internet for encouraging Americans to obey the teachings from the Bible.

I know this because my new TV show that is financially supported by donors like you was canceled on Vimeo, a popular video platform. That’s because the far-left Southern Poverty Law Center identifies one of our Christian advertisers as a hate group and one pastor said that homosexuality is a sin.

And a few months ago, we ran billboards in distressed communities with a simple message about how to get ahead: 1. Finish school. 2. Take any job. 3. Get married. 4. Save and invest. 5. Give back to your neighborhood.

Immediately, BLM-motivated activists protested the billboard company and forced them to remove our message! You can see in the photos below how one of the billboards was removed as a local news station was reporting on our so-called controversial message. If our work was ineffective and unable to change hearts and minds about our country and the policies that keep us free, why would the left work so hard to keep Americans from hearing our message?

Keep our work alive by joining thousands of Americans like you who know our message is needed right now more than ever by clicking and following this link to donate $25, $50 or $100 right now.

Will you also consider making your donation monthly as we fight for our nation’s most precious commodity: our freedom to speak, to act and to assemble?

Your foot-soldier for freedom,

“Any Color as Long as it’s Black” A Brief History Of...