It’s a quote Randy Boyd surrounds himself with—in his Knoxville home, in his office, on a wall at his apartment in Nashville.

Each day, he reads it.

“Sometimes daring mighty things is uncomfortable,” he says. “You had to step out of your comfort zone, and there’s a probability when you dare mighty things that you’ll fail.”

But he also knows that any great transformation, any great success, must begin with a step into chance, even if the specter of failure follows.

“It’s OK to fail from time to time as long as you’re striving for the right things,” he says.

That philosophy accompanied him as he stepped into the role as interim president of UT. Joe DiPietro retired from the position in November.

It’s not a role the 1979 UT Knoxville graduate envisioned for himself. But, along with daring mighty things, he’s learned to make room in life for some serendipity.

After failing at one business venture (a barometer alarm to provide early warnings of tornados) and learning lessons (“It’s a lot easier to innovate around a category where there’s already existing demand than to create demand where it doesn’t exist”), Boyd went on to create Radio Systems Corporation. With more than 700 employees, offices in six countries and the brands PetSafe, Invisible Fence and SportDOG, Boyd did not fail.

That success began a trail of unforeseen circumstances that led him back to UT.

“This was not part of the trajectory,” Boyd says of interim president position.

Yet serendipity—that unexpected opportunity, that new path that leads to something better than the plan—happened.

“Wake up every day with your plan, everything that you plan to do, but also expect some serendipity because very likely something will happen to you that day that was better than you planned, that could be the best thing that could have happened,” he says about his philosophy leaving room for fate.

“Far better is it to dare mighty things, to win glorious triumphs, even though checkered by failure …than to rank with those poor spirits who neither enjoy nor suffer much, because they live in a gray twilight that knows not victory nor defeat.”
—Theodore “Teddy” Roosevelt

An interest in and philanthropy toward changing education led to his being the architect behind Tennessee Gov. Bill Haslam’s Drive to 55 plan, which seeks to increase the number of Tennesseans with higher-education degrees from 32 percent in 2013 to 55 percent in 2025. By that year, an estimated 55 percent of jobs in the state will require education beyond high school, whether an associate’s degree in welding or a doctor of medicine. By accomplishing that goal, Tennesseans will make $9 billion more a year, and the state coffers will see an increase of $700 million.

“It’s a huge opportunity when we’re successful,” Boyd says of Drive to 55. “If we fail, for every percentage we’re short, that’s a percentage of our population that’s either going to be unemployed or underemployed. We have to hit it. It’s all or nothing.”

Randy Boyd likes goals. He especially likes ones that he calls “BHAGs”—Big Hairy Audacious Goals with missions between the probable and impossible.

While he will work with chancellors and senior leadership in the near future to establish those, he has set other goals for his time as UT’s interim president:

From his role in increasing the number of Tennesseans with a higher education, he was named commissioner of economic and community development. While there, a study linked more education to higher incomes and better health.

increase economic prosperity, it all starts with education,” he says. “This is why the work that we do here at the University of Tennessee is so critical.”

Some of Boyd’s earliest memories involve sitting in Neyland Stadium with his grandfather and cheering on the Vols. Yet, when he graduated from high school at 16, college wasn’t necessarily part of his plan.

Since the age of 8, Boyd worked in his father’s factory—sweeping floors, assembling parts, running a riveting machine. After graduating, his father offered Boyd a full-time job at the factory. But Boyd decided he wanted a degree. He worked two 12-hour shifts on weekends to pay his way through UT.

“It was about getting the education I needed to be successful, and my mom was always a big advocate for education,” he says of seeking his bachelor’s degree.

At age 19, he graduated with Bachelor of Science in industrial management.

He went on to earn a master’s degree in liberal studies with a focus on foreign policy from the University of Oklahoma in 1988.

“If you want to change the world in a most profound way, education is the place to do it,” Boyd says. 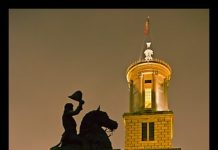