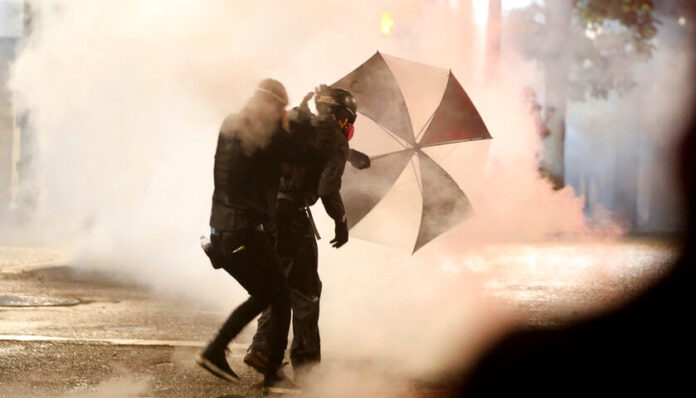 SALEM, Oregon (AP) — Oregon Gov. Kate Brown declared a state of emergency Friday as she announced that state troopers and sheriff’s deputies would be sent to Portland through the weekend to help police, in the state’s largest city, monitor a weekend rally by the right-wing group Proud Boys and counter protests by liberal groups

Portland has been roiled by often violent protests for more than three months following the police killing of George Floyd in Minneapolis.

Demonstrations that went into a lull during Oregon’s recent wildfires resumed this week, fueled by a Kentucky grand jury’s decision to not indict officers in the fatal shooting of Breonna Taylor.

“This is our entire community coming together to protect our community,” Brown said. “We want the highest level of coordination and the strongest leadership possible.”

Under the state of emergency declaration, Oregon State Police and Multnomah County Sheriff’s Office will have the authority to set curfews and close roads.

In addition, Hampton said officers sent to Portland could use tear gas and less-lethal ammunition to disperse crowds if the protest and counter protests becomes violent or if people’s lives are in danger.

“Certainly with the use of any tool or option, we are always going to be proportional in our response,” Hampton said. “We want to do everything we can to intercede early, so we don’t have to get to a higher level of force if it’s required to keep the peace.”

Hampton said that the change in command “is in no way an indictment of our colleagues at the Portland Police Bureau for the job that they have done or would have done this weekend.”

“The Portland Police Bureau, their officers have endured some incredibly mentally and physically taxing situations for over 100 days, while they have done the best they can to keep Portland streets safe,” Hampton said.

State troopers, sheriff’s deputies and local police have worked together in the past during downtown protests in Portland. Hampton said.

Similar competing demonstrations have ended with fistfights and bloodshed, including the fatal shooting on Aug. 29 of Aaron “Jay” Danielson, a supporter of a right-wing group, who was killed in Portland after a caravan a pro-Trump supporters drove pickup trucks in a caravan downtown.

The suspect, antifa supporter Michael Reinoehl, was shot in a hail of gunfire by federal officers as they moved in to arrest him in neighboring Washington state.

Ahead of the planned Proud Boys rally set for Saturday, Brown said she “is incredibly concerned about the increased risk of violence in Portland this weekend and the safety of all Oregonians.”

“Some people will be armed, with others ready to harass or intimidate Oregonians,” the Democrat said. “The pattern of these particular groups is clear, to intimidate, instigate and inflame.”

Organizers have said that the Proud Boys rally will support President Donald Trump and the police and condemn anti-fascists that the group accuses of “domestic terrorism.”

The city denied a permit to protest organizers, citing estimated crowds of thousands amid the coronavirus pandemic. But police said they will not try to stop the Proud Boys from gathering at a park in northern Portland.

Protesters in Portland late Thursday set fire to plywood attached to the front door of a police union building and clashed with officers, who made 14 arrests, police said in a statement.

The protesters who were detained were arrested on charges ranging from disorderly conduct to interfering with officers and trespassing.

The violence came a day after people hurled several firebombs at officers during a demonstration in which 13 were arrested.

Sara Cline is a corps member for the Associated Press/Report for America Statehouse News Initiative. Report for America is a nonprofit national service program that places journalists in local newsrooms to report on undercovered issues.

About the Headline Photo: Protesters demanding the end of police violence against Black people are sprayed by police during a demonstration in Portland, Ore., on Wednesday, Sept. 23, 2020. Protesters in Portland hurled Molotov cocktails at officers in Oregon’s largest city during a demonstration over a Kentucky grand jury’s decision to not indict officers in the fatal shooting of Breonna Taylor, police said Thursday. (Mark Graves/The Oregonian via AP)

Oregon Gov. Kate Brown declared a state of emergency Friday as she announced that state troopers and sheriff’s deputies would be sent to Portland through the weekend to help police, in the state’s largest city, monitor a weekend rally by the right-wing group Proud Boys and counter protests by liberal groups
Portland has been roiled by often violent protests for more than three months following the police killing of George Floyd in Minneapolis.
The article Oregon Governor Sends State Police to Portland for Protests appeared first on Tennessee Star. 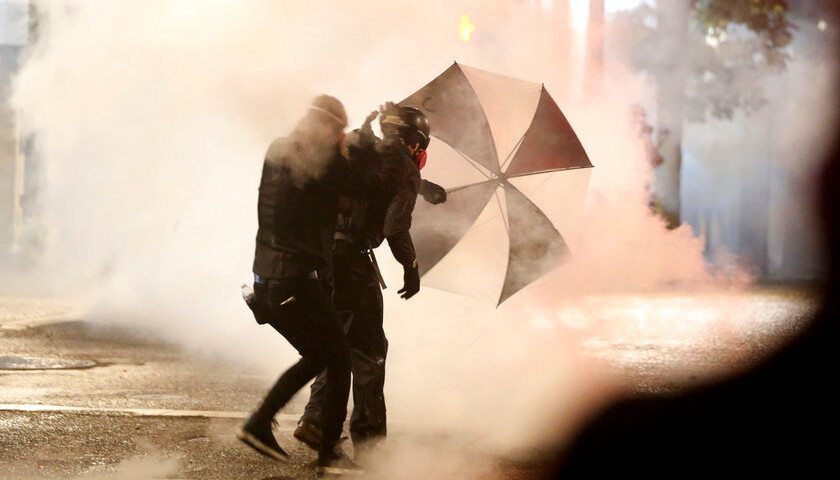 New Unemployment Claims Surge Past a Million After One Week Drop...