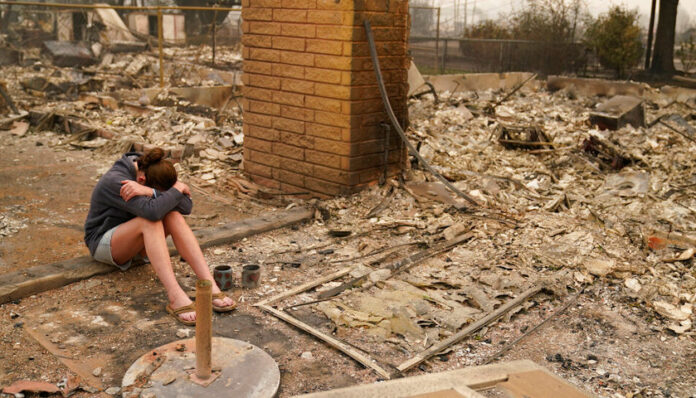 by Andrew Selsky and Sara Cline

SALEM, Oregon (AP) — Hundreds of firefighters battled two large wildfires Friday that threatened to merge near the most populated part of Oregon, including the suburbs of Portland, and the governor said dozens of people are missing in other parts of the state.

The state’s emergency management director, Andrew Phelps, said officials are “preparing for a mass fatality event” and that thousands of structures have been destroyed.

Gov. Kate Brown said more than 40,000 Oregonians have been evacuated and about 500,000 are in different levels of evacuation zones, either having been told to leave or to prepare to do so. She was dialing back on a statement late Thursday issued by the state Office of Emergency Management that said a half-million people had been ordered to evacuate statewide.

Dozens of people are missing in Jackson County in the south and Marion County, where a fire continues to burn east of Salem, Brown told a news conference Friday. Also Friday, authorities announced that a man had been arrested on two counts of arson for allegedly starting a fire in southern Oregon on Tuesday.

The Oregon Convention Center in Portland was among the buildings being transformed into shelters for evacuees. Portland, shrouded in smoke from the fires, on Friday had the worst air quality of the world’s major cities, according to IQAir.

National Guard troops and corrections officers transferred about 1,300 inmates from a women’s prison in a southern suburb of Portland “out of an abundance of caution,” the Oregon Department of Corrections said. Spokeswoman Vanessa Vanderzee said it took 20 hours to transfer the inmates Thursday to another prison in a safe zone.

A change in the weather, with winds dropping and shifting direction and humidity rising, greatly helped firefighters struggling to prevent the two fires from advancing farther west into more-populated areas.

“The wind laid down quite a bit for us yesterday. There also wasn’t that strong eastern wind that was pushing the fire more to the west,” said Stefan Myers of the state’s fire information team.

Winds coming from the Pacific Ocean also neutralized the fires’ advance and even pushed them back, Myers said.

Almost 500 personnel were working on the fires, which were just a few miles (kilometers) apart, with rugged terrain between them that limits boots-on-the-ground efforts to keep them apart, Myers said. If they merge, they could generate such heat that it causes embers to fly thousands of feet into the air, potentially igniting other areas, Myers said.

The high number of fires occurring simultaneously in the span of just a few days in Oregon was fueled by dry conditions, high temperatures and especially strong, swirling winds.

Brown said Thursday that more than 1,400 square miles (3,600 square kilometers) have burned in Oregon over the past three days, nearly double the land that burns in a typical year in the state and an area greater than the size of Rhode Island.

Oregon officials haven’t released an exact death count for the wildfires, but at least eight fatalities have been reported in the state. A 1-year-old boy was killed in wildfires in Washington.

A Northern California fire that tore through several hamlets in the foothills of the Sierra Nevada this week killed 10 people, making it the deadliest of the year.

In Oregon, evacuation centers opened across the state.

Kim Carbaugh fled from her home in Lyons with her husband, two children and two horses Monday.

“When we were driving away and I could see actual fire, the red and orange flames, at the time I didn’t feel scared, I had so much adrenaline — we just had to leave,” she said Friday from the livestock stables of the evacuation center at the State Fairgrounds in Salem.

One fire approached Molalla, triggering a mandatory evacuation order for the community of about 9,000 located 30 miles (48 kilometers) south of Portland. A police car rolled through the streets with a loudspeaker blaring “evacuate now.”

With the two large fires — called the Beachie Fire and the Riverside Fire — threatening to merge, some firefighters in Clackamas County, which encompasses Molalla, were told to disengage temporarily Thursday because of the danger. Officials tried to reassure residents who abandoned their homes and law enforcement officials said police patrols would be stepped up to prevent looting.

The change in weather also aided efforts to contain a fire near Lincoln City, on the Oregon Coast, that according to an estimate has damaged or destroyed at least 100 structures.

“Thank God, we got a wind shift. The wind started coming from the west, pushing the fire back towards the east, and that’s what kept it within its footprint and kept it from growing,” fire spokesperson Ashley Lertora said.

Oregon’s congressional delegation announced Friday that the White House has approved the state’s request for an emergency declaration that will help provide immediate assistance from the Federal Emergency Management Agency.

Jackson County Sheriff Nathan Sickler said Friday that a 41-year-old man was jailed on two charges of arson for a fire that started Tuesday in the Phoenix area in southern Oregon.

Sickler said the Almeda fire, which burned hundreds of homes, had ignition points in Ashland near the spot where a man was found dead, and in Phoenix. Authorities said the man was arrested at the second ignition point in Phoenix and that he denied starting the fire.

Police are still investigating the first ignition point in Ashland.

In southern Oregon near the California state line, much of the small town of Phoenix was wiped out. A mobile home park, houses and businesses were burned, leaving twisted remains on charred ground.

Many of the residents were immigrants, with few resources to draw on.

Artemio Guterrez, a single father of four, had been at work at a vineyard when he saw thick smoke spreading through Rogue River Valley. He snatched his kids to safety. They escaped with only the clothes they were wearing.

“I’m going to start all over again. It’s not easy but it’s not impossible either,” said Guterrez.

In a news conference Friday, Washington Gov. Jay Inslee noted that the amount of land burned in just the past five days amounted to the state’s second-worst fire season, after 2015. He called the blazes “climate fires” rather than wildfires.

“This is not an act of God,” Inslee said. “This has happened because we have changed the climate of the state of Washington in dramatic ways.”

About the Headline Photo: Derek Trenton from Talent, Ore. salvages some items at his parents home as wildfires devastate the region, Friday, Sept. 11, 2020 in Talent, Ore. (AP Photo/Paula Bronstein)

Hundreds of firefighters battled two large wildfires Friday that threatened to merge near the most populated part of Oregon, including the suburbs of Portland, and the governor said dozens of people are missing in other parts of the state.
The state’s emergency management director, Andrew Phelps, said officials are “preparing for a mass fatality event” and that thousands of structures have been destroyed.
The article Dozens Missing as Firefighters Battle Two Large Oregon Fires appeared first on Tennessee Star. 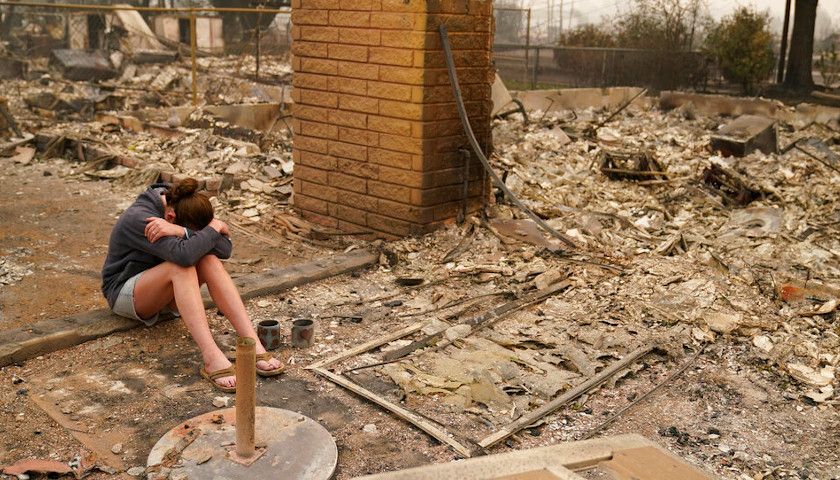 Joe Biden Claims 6,000 Military Members Dead From COVID, but the...