Publisher’s Note: Congratulations to Smyrna ‘homeboy’ Danny Brewer on his induction into the Smyrna Bulldog Hall of Fame for his longtime efforts as a contributor to Bulldog athletics. Danny Brewer, a member of Smyrna High School’s class of 1985 and was a member of the Bulldog baseball program in 1983-85.

Everyone that is a friend or acquaintance of Danny knows that his blood runs purple and gold. Since Danny’s graduation he has stayed actively involved to support his alma mater for several areas. 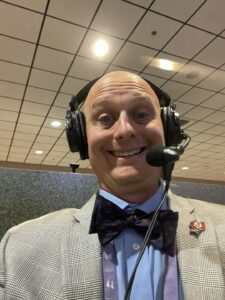 He has written for different local newspapers — as well as being a voice and writer for WGNS Radio helping to keep Bulldog spirit alive — not only in Smyrna, but Middle Tennessee as well.

On March 11th of this year I had the opportunity to tour my Alma Mater Smyrna High School with Dr.Sherry Southerland and Coach Tony Trumphour. I was shocked that he was still teaching and coaching.

From 2008 through 2013 Brewer has served as a summer coach for Smyrna High School baseball feeder teams and was booster club president for Smyrna High Baseball from 2012-2014.

His well-known Smyrna business, Dr. Automotive, he has sponsored many different sports and events since 2004.
There’s no doubt Danny Brewer bleeds purple and gold.
I have personally witnessed him, his brother Randy and his family help many in the Smyrna community—including my own sister Vickie Sparks. Danny and Randy helped her on her car before she suffered from a bad fall and hit her head, thus having a brain bleed and paradises. My sister Vickie who was MVP on Smyrna Softball team back in 1981when they were state runner ups. She was diagnosed with a brain tumor at the age of 30.

According to the Murfreesboro Post others were also enshrined two individuals and two teams into their athletic hall of fame on Saturday, Oct. 15.

Philip Shadowens and Pierre Lyons were inducted for their achievements as coaches. The State championship bowling teams from 2009 and 2011 was also inducted. The ceremony was held Saturday, Oct. 15 in the Smyrna High School auditorium.

After becoming the head coach in 1994, Shadowens ushered in a new era of Bulldog excellence on the gridiron. Walking the Smyrna sidelines for 14 seasons, “Coach Shad” orchestrated countless “big” wins and helped Smyrna become the first public school to win back-to-back state championships in the TSSAA’s highest classification.

State championships in the 2006 and 2007 seasons are just a part of an unforgettable legacy in becoming the Bulldog’s all-time leader with 113 career coaching wins.

In 1987, Lyons became the first coach to lead a Rutherford County baseball team to the state tournament when he guided the Bulldogs to a third place finish.

Before his coaching days at Smyrna, the hard-driving Lyons was the first African American student from Rutherford County to sign a professional contract (Cincinnati Reds).

After leaving Smyrna, Lyons became the first African-American to be inducted into the Rutherford County baseball hall of fame in 2003. While leading the Bulldog baseball program Lyons enjoyed over 100 wins.

Woman Who Punched Philadelphia Churchgoer Will Not Be Charged, Police Say