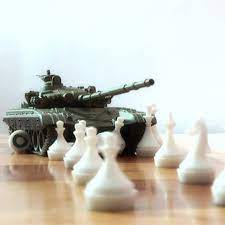 The Cornell-Harvard hockey matchup is legendary. Harvard home fans used to play square-dance music and throw hay on the ice making fun of bumpkins from upstate New York. In retaliation, Cornell fans at Lynah Rink in Ithaca would throw fish on the ice (they still do despite being searched on entry), and for many years they even tied a live chicken to Harvard’s goal. I spoke with a recent graduate who explained how students have modernized taunting.

Using fake social-media accounts with pictures of attractive coeds, hecklers would inevitably “friend” Harvard’s goalie and learn details about his personal life. During the game, the crowd would taunt him about his aunt Millie, dog Muffin or recent breakup. Eventually the goalie would turn and stare at the crowd in confusion. Successful psy-ops!

The same tactics are leaking into war planning. Psychological operations are nothing new: We’ve had Tokyo Rose, pamphlets dropped from planes, and Iraq’s Information Minister Baghdad Bob’s spewing lies on CNN. Now Instagram? In February 2012, I wrote a columntitled “When Will Social Media Elect a President?” Most readers said never. Well, that ship has sailed. It’s time to ask: When will social media alter wars?

In 2019 during a military exercise, the North Atlantic Treaty Organization’s Strategic Communications Center of Excellence deployed a “red team” to see if it could disrupt 150 soldiers.

Spending only $60 on Russian bots and using only open-source data, researchers were able to learn the usernames, phone numbers, emails and identities of soldiers. They also engaged with them on Facebookand Instagram, mapped their connections with other armed-forces members, determined their location within a kilometer, and even got soldiers to send selfies with their equipment. Apparently even soldiers believe that if it isn’t on Instagram, it didn’t happen.