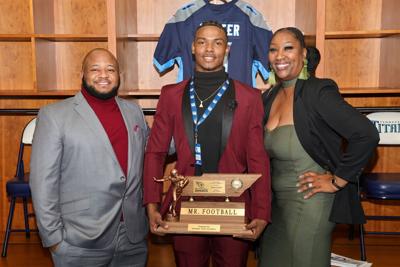 SMYRNA – Arion Carter will be a Vol.

Arion Carter, a one-time Memphis football recruit and four-star linebacker, announced his decision to commit to UT on Wednesday, choosing the University of  Tennessee Volunteers over Ohio State and Alabama.

“It was really just the coaching staff,” said Carter, who was projected by scouting services to be leaning toward choosing Alabama until early this week. “The people that I had around me, the relationships that I could build. And, being an in-state home kid, there were a lot of advantages to that.”

“Arion Cater is one of the most complete high school football players I have ever seen in all my years of covering football,” said Smyrna’s Danny Brewer.

Carter, a 6-foot-1, 210-pound linebacker, originally committed to Memphis in July, but racked up a bevy of Power 5 offers after the season began and narrowed his final five to Alabama, Tennessee, Michigan, Ohio State and LSU.