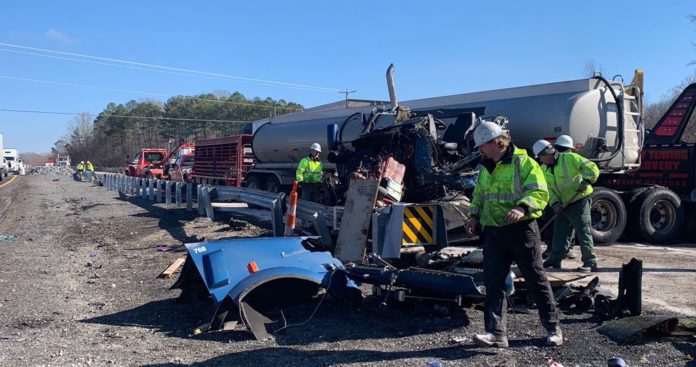 BUCKSNORT, TENN — The eastbound lanes of Interstate 40 was closed Thursday morning as officials investigated a collision that killed two drivers in Hickman County.

Both the drivers of two tractor-trailers who were killed on I-40 in Hickman County on Thursday.

Tennessee Highway Patrol said a 2012 Kenworth tractor-trailer driven by 58-year-old Johnny F. Smith of Smyrna, TN was traveling westbound on I-40 around mile marker 152 when the truck went off the roadway and struck the concrete barrier, crossing over the median into the eastbound lane, and striking the front end of a 2000 Volvo tractor-trailer driven by 44-year-old Muriz Smajic of Desplaines, IL.

The cause of the crash remains under investigation. The condition of a passenger in the crash is unknown, and additional details about that passenger including which vehicle the passenger was in was not given.

The crash happened near Exit 152 for Bucksnort Road just after 6:30 a.m.

Authorities have not released the names of the victims at this time.

Dems With Power Flex Their Muscles Ahead of Election Day to Push Agendas, Punish Trump Supporters